The spirit of sharing is inseparable from the holidays. As it has happened in previous years, there are several Toy Drives organized by different Taos businesses and organizations to bring a smile to the little ones’ faces.

“The ‘Festival of Lights,’ Hanukah, is a few weeks away,” said Rabbi Eli Kaminetzky of Chabad of Taos. “The theme of this festival is the miracle of one small jug of oil burning for 8 days, which symbolizes that a little bit of light can push away a lot of darkness.”

In honor of Hanukah, Chabad will once again be launching the Hanukah Toy Drive. Many of the underprivileged children of TaosCounty will receive a special gift in honor of the Festival. “The Toy Drive has proven to be a powerful initiative to help ‘spread the light’ and brighten up the lives of many children in TaosCounty,” said Rabbi Kaminetzky. “In fact, last year we reached our goal of raising and distributing 1,000 toys, books and other gift items to these wonderful kids. We are looking forward to raising more toys this year than ever before.”

The Angel Tree Project has been in existence for around 16 years. It started in Taos Pueblo and later expanded to the entire Taos County. Jerry and Shirley Lujan founded it to help disadvantaged children, special need citizens and the elderly in the community so they can receive toys, gifts and household goods during the holidays. In 2007, the Lujans were named Taos News Unsung Heroes for their participation in this project.

“We haven’t set the actual toy giveaway date yet, but it will be in the middle of December,” said Shirley Lujan. “We will have drop-off boxes at WalMart, Walgreens, Centinel Bank, Peoples Bank and at the Taos News. They will be placed at the businesses on November 10th.”

Interested people may also call Shirley Lujan at 575-613-0840 or Jerry Lujan at 575- 613-2843 to have toys or donations picked up. All monetary donations need to be made out to the Angel Tree Project.

Another project that is celebrating 16 years of giving and sharing is the Angel Tree Holiday Gift Giving Event hosted by Community Against Violence. This event is for families of Taos County that are survivors of domestic and or sexual violence.

“Every year CAV, along with the community, helps families who are struggling financially and have no means of providing their children with holiday gifts,” said Loretta Romo, the Shelter’s Service Director. “We invite people to drop by the office at 945 Salazar Rd. to pick up an angel’s wants and needs and return back to the office by December 12th. The gifts will be distributed by December 15th.”

CAV workers put together an anonymous list of children (the “angels”) sorted by gender and age, and a list of the items that they either need or want. Donors go to the CAV offices or call them and pick up the angels they want to help. Then they shop for the presents and bring them back to CAV. They can also buy a gift for a child of any age or gender and bring it by.

“The gifts can be wrapped or unwrapped, whatever is easier,” said Romo.

Twirl Toystore and Playspace will be partnering with Dream Tree for its toy drive this year. The Dream Tree project is an Emergency Youth Shelter Program for youth in immediate need, ages 12 to 17 years old.

“We like the idea of supporting a different organization this year and feel this program is a very worthy cause,” said Nikki Ross, Twirl’s Marketing Director. “We would like to provide the Emergency Youth Shelter Program with a gift hamper filled with older games that teens can play together during their time in the shelter.”

Twirl will select its most popular games for the hamper and their customers will be invited to purchase one for 50% off.

“I spoke to the new Executive Director of the Dream Tree Project, Catherine Hummel, and she was very excited about the idea as they have recently started a weekly game night for their kids, so it’s the perfect fit,” said Ross. “They will also receive the proceeds from our Taos Aglow advertisement as well as the sale of our tree at the Festival of Trees.”

There are plenty of ways to make this time special, Taoseños! Come out and help bring joy to the hearts of Taos children during the holiday season.

Where and how to donate:

All contributions can be submitted online at JewishTaos.com, or donated or mailed to:

Twirl is located at 225 Camino de la Placita, opposite Our Lady of Guadalupe Church. 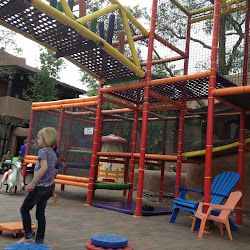