According to the latest U.S. Census Bureau, many baby boomer women, currently between sixty and seventy-five years old, are expected to live into their nineties. But exactly does that mean for them?

For a long time, “life after sixty” meant slowing down, working less, or not working at all, and—well, retiring. But this has changed. Some people just don’t want to retire. Others can’t.

Writer, educator and former chef Bonnie Lee Black is among those who never planned for retirement.

“The odd thing is, I never thought I would live this long,” she said. “My mom died at sixty-nine, and since we were so alike physically, I always suspected, deep-down, that sixty-nine would be my end-date too. Well, I was wrong! Here I am at seventy and can’t remember when I felt better.”

She just retired from UNM, where she taught English and culinary classes for ten years.

“I’m blazing my own, new trail and loving it,” she said. “Now I’m free to travel and explore more of the world—other countries, other languages, other ways of living and being.”

Now she is in Guanajuato, Mexico, for four months, working on a culinary project and a historical novel about her great-grandmother.

“I have the luxury of being able to focus since I have fewer distractions,” she said. “When we are younger we are pulled in different directions, but at this moment in my life I can just concentrate on what I want to do. My current goal is to write another good book.”

Mary McPhail Gray brought to Taos a diverse background that includes her experience in higher education and her many years in Washington D.C., where she was the deputy administrator for 4-H, family and nutrition programs in the National Institute of Food and Agriculture. She has PhD in Family Ecology and Special Education from Michigan State University.

Gray came to Taos for the first time thirty-five years ago, when she stayed at the Mabel Dodge Luhan House. She came back and visited many times afterwards until she moved here permanently in February 2011.

“I knew that, if I wanted to meet people, I needed to do some kind of volunteer work,” she said. “I was raised in the Midwest and have this deep commitment to giving back to others. I also come from a family of teachers who were always about community—volunteerism comes naturally to me.”

She became involved with NonViolence Works in December 2011 as a board member.

“They needed people who knew about behavioral health,” she said. “So I was happy to be part of it.”

Currently she is the Chairwoman of the nonprofit and considers her volunteer work “very rewarding.”

“When you retire, it’s critical that you look at your physical health, your creativity and your voluntarism,” Gray said. “So I also took to playing the cello for the creative aspect, to playing golf for my physical health, and I also got a big dog, Kona, a rescue.”

She sees Taos as a beehive of talented people.

“It’s a great place to work with people of different ages,” she said. “I feel rich in friendships and connections. I am very grateful for the many talented people I have met here.”

Gale Picard Dorion: dreaming the dream of the Earth

Moving into the culinary field was a surprise to Gale Picard Dorion, a farm-to-table chef who made a career change, from jewelry making to catering, at seventy-two years old.

“Yet it shouldn’t be that surprising,” she said. “I’ve always loved to nourish people and to be of service.”

She refers to two quotes that define her choice of what turned out to be her “second life after retirement.”

“One is ‘If the land dreams through us, what does it dream?’ from Clare Coté and Anna Keleher’s website Dreaming Place,” she said. “The other one: ‘To put our passion in service to our Earth’s dreams,’ from Reverend Gary Kowalski’s talk June 7th at the Unitarian Universal service. This is my dream, that I feel is the Dream of Earth dreaming through me—I want to be part of the ‘feed-back’ loop, in service with Earth’s dreams, that help our community to flourish.”

When asked for advice to women who are planning to reinvent themselves after retirement, she said,

“Chose what touches you personally, what answers an inner dream, what releases a passion, for those are often the ones that resonate with Earth’s dreams and give the impetus (and endurance!) needed to make a ‘second life’ succeed, and even have a Butterfly Effect in our world, with our small changes producing big effects.”

Gael Minton: from classroom to farm 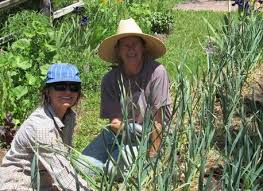 Gael Minton was an adjunct professor at Antioch University in New England for twenty-seven years. She has a PhD in Environmental Health Sciences and Clinical Nutrition and was Director of Admissions at Antioch in Keene, New Hampshire, for nine years. Her husband Ty Minton is a native New Mexican and founder of the Antioch University New England Environmental Studies Graduate programs.

Retiring from academia in 2001, the Mintons restored two acres of historically irrigated land on Acequia del Monte in Talpa.  Gael has been a Commissioner of the Acequia since 2004. She is on the Taos Valley Acequia Association board and active with the New Mexico Acequia Association.

Gael Minton also keeps bees and is active in a network of Taos Women Farmers, which she started in 2010.

She is an amateur flutist who has studied with Nancy Laupheimer here in Taos and played in the Santa Fe Flute Choir. She is in her mid seventies and her husband in his late seventies, yet they don’t consider themselves “retirees.”

“We just changed the main focus of our work,” she said. “My husband is now a fulltime potter and I farm three seasons of the year. We love the climate, environment and community of Taos.”