The San Francisco de Asís Church is the heart and soul of the Ranchos community. It is also a National Historic Landmark and one of the most photographed and painted buildings in the country.

“But, above all, our church was, and still is, the hub of social and spiritual life in the Ranchos Valley,” says Ranchos resident David Maes, whose ancestors came with the Spanish settlers who settled the Ranchos Valley sometime around 1720. “She is also an icon of the Spanish colonial era and this year we are celebrating her two hundredth birthday.”

There aren’t precise records that indicate how long it took to build the church, but Señor Maes estimates it would have taken at least several years.

“The only thing we know for sure is that it was completed in the fall of 1815,” he said. “But for me, the big question is how it was built, considering that there were only about seventy families living in the plaza-fort at that time. How many were able-bodied young men, physically able to cut and haul trees from nearby mountains to make the vigas, and to produce the thousands and thousands of adobes needed to build the original church? Beyond working on the construction of the church, they had to plant crops, irrigate, hunt, grow and store food for the winter…How did they manage to complete it?”

This is one of the mysteries surrounding the church, but it’s not the only one. 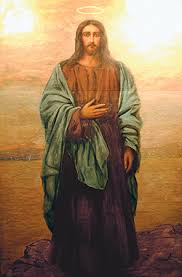 “The Shadow of the Cross” is an eight-foot painting made by a Canadian artist, Henry Ault, in 1896. It was donated to the Ranchos Church by Mrs. Herbert Sidney Griffin, a wealthy parishioner, in 1948.

The painting is known for its unexplained luminescent quality, which can only be appreciated in the dark. In regular light, it shows a life-size image of Jesus standing on the shore of the Sea of Galilee. When the lights are turned off, the image becomes a luminous three-dimensional silhouette and over his left shoulder, the shadow of a cross becomes visible. There is also a small boat in the distance. Neither the cross nor the boat can be seen in daylight.

Julia Katz, from New York, is visiting the Ranchos Church.

“I find the painting mysterious inspiring and intriguing,” she said. “I am also very curious about what materials the artist used.”

Janet Oliver, a Taos resident, came to see it for the first time.

Tina Torres, who works at the gift shops, explains that scientists have confirmed that no radium or other luminescent materials are present in its composition.

“For me, the importance of the painting is the impact it has on people when they first lay eyes on the barefoot Jesus standing on the shores of Galilee.” said Señor Maes. “I believe the painting is an actual representation of Jesus, the man-God. Notice that his skin isn’t white, but coffee colored. The Jesus in the painting looks like a God. Maybe He is trying to tell us that the painting is a true representation of the way he looked when He walked the earth, and perhaps that is what produces such a miraculous effect.”

The enjarre: a labor of love

Cindy Miera Jeantette is the parish secretary. Born in Ranchos de Taos, she has attended the Ranchos Church all her life. She was baptized, made her first communion and was confirmed and married there.

“All the sacraments, up to now,” she says.

She has also helped in different manners during the enjarres, the annual re-plastering of the exterior walls and buttresses of the building that is done every June by local parishioners and volunteers.

“In the sixties, the walls were coated with cement stucco, but it didn’t work because the adobe bricks need to breathe,” Miera said. “We almost lost the church! So we went back to the way of los viejitos, doing what our ancestors did. The cement coating was removed and we started enjarrando every year after that.”

They use traditional adobe (sand, straw and clay) to replaster the building.

The enjarre has also a spiritual meaning for Miera and many other participants in the annual ritual.

“The church is alive because of the labor of love done by the enjarradores,” says Margarita Martinez-Maes, a native of the Dominican Republic who considers herself “an adopted Taoseña.” “When we come together we are not only repairing the church but also renewing our faith.”

Between forty and sixty people show up every day during the two weeks that the enjarre work lasts.

“The mayordomos make sure that everyone is fed,” Martinez-Maes said. “We all bring something to eat and it’s like a big family feast.”

The mayordomos are stewards who help prepare the liturgy of the mass and keep the church clean at all times. There are eight couples of mayordomos that take care of the Ranchos Church and four for the chapels associated with the parish: Nuestra Señora de San Juan de los Lagos (Talpa), Our Lady of Mount Carmel (Llano Quemado), and San Isidro Labrador (Los Cordovas).