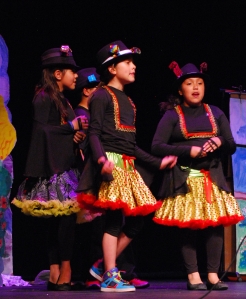 “The Taos Elementary Arts Program has hosted at least 50 different artists since 2004,” said program coordinator Tanya Vigil. “A wealth of professional artists resides in our community and they are the resource we look to, to share their considerable experience and talent into the classrooms.”

Forth-grade students from Laura Dumond-Kerr’s class at Arroyos del Norte Elementary School did their interpretation of Sevillanas, a Spanish folk dance. “The vibrant traditional costumes are a reflection of the joyous celebration of life as portrayed through the dance,” said Rio Fernandez, who has lived in Spain and studied Flamenco there.

Laura Dumond-Kerr is delighted that her students had this opportunity to know more about the Flamenco culture. “The flamenco capital of the United States is in Albuquerque so it was very appropriate that the kids learn about the music, the postures, and the moves, which are very different from what they see in everyday life here,” she said.

“It was a wonderful experience to work with the visiting artists,” said Hammer, who teaches at Ranchos de Taos Elementary School. “My students learned a lot about music and dances that date back to the time of their grandparents and great-grandparents, and they enjoyed it tremendously. This kind of projects contributes to preserve the rich musical heritage of northern New Mexico and pass it on to the younger generations so they can appreciate it.”

Juan Archuleta, the music teacher at Enos Garcia and director of the band Agua Negra, provided the musical background. He played traditional songs like La Llorona, Cielito Lindo and De Colores, plus other pieces that he composed especially for La Grilla.

The play was already performed for the National Association for Bilingual Education at the National Hispanic Cultural Center in Albuquerque, where the actors received outstanding ovations, just like last Thursday night at the TCA

“The kids were challenging in the rehearsals because they had so many ideas and so much energy,” said Ms. Thibodeau. “But everything turned out perfect. Today they were twice as funny as they were before and it was very rewarding to see that everybody was getting it, in English and in Spanish. I feel honored and happy to be part of this project.”

“The talent we have in our community is amazing,” said Rose Martinez, director of instruction and federal programs for the Taos Municipal Schools. “I am so proud of these kids, of the efforts they have put into the productions. Through the Elementary Arts’ Program we have been able to revive the lost art and culture that many of us have grown up with, by integrating the old with the new.”

This program is available every year to the students of Taos. It gives them exposure to a wide variety of art as well as the opportunity to unleash their own creativity. “It also has a huge impact on the wellbeing of every child who participates,” said Tanya Vigil. “Our program is a true celebration of community, family traditions and life.” 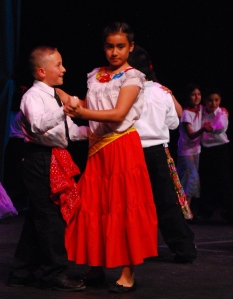