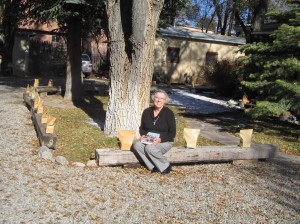 Shell outside Taos Lodging, holding a copy of Kuralt’s America

After Inda Lou Schell read Charles Kuralt’s America for the first time, in 1995, she and her husband decided to follow the journalist’s journey.

“We loved his descriptions of the places and personalities and wanted to have a similar experience discovering our land and its people,” said Schell.

Unfortunately, Schell’s husband passed away in 2004 without having taken the trip, but the idea stayed with her. In January 2011 she got on the road accompanied by her younger sister, Janie Gass. They had two purposes in mind—spend a year travelling Kuralt’s route and then write their own, personal book about their trip. The book’s working title is Revisiting America.

“We planned to visit the same places that Kuralt mentioned in his book but not necessarily in the same order,” said Schell. “He traveled by plane, but since we were driving, we had to modify the itinerary a bit.”

They started in Louisianaon January 2nd, 2011, and went on to Florida, South Carolina, North Carolina, New York, Vermont, Maine, Minnesota, Montana  and Alaska. The last state on the list was New Mexico and now Schell is right here inTaos.

Among the highlights of the trip Schell mentions meeting with Robert Mitchell, the photographer who took the cover photo for America. “My sister and I met him in Maine and had our pictures taken in front of the same lighthouse where he took Kuralt’s,” she said. “He told us he would do the cover for our book, too. That was extremely encouraging.”

“The owner knew him and was very helpful to us, gave us a lot of information,” she said. “Actually, everybody we met along the way was willing to be of help. That was the best experience of the trip.”

Though it wasn’t her original plan, Schell made the last part of the journey by herself.

“My sister got sick and had to go back home in mid July,” she said. “It was a pity because she was enjoying the trip as much as I was. But we will still write the book together, of course.”

The sisters plan to get on the road again once their book is published and do readings and book signings in every place they visited this time.

“Lots of people asked us to come back and told us they would buy our book,” Schell said. “And I would return to any of these towns and cities in a heartbeat.”

She felt lonely at times. “More so after my sister returned home,” she admits. “But I kept going because it was also a refreshing experience for me. And I wanted to capture these feelings of adventure and transmit them to others, particularly people of my own generation.”

The importance of being active is the main message of the sisters’ book. “Even after we retire, we have to keep moving, enjoying life, meeting new people” Schell said. “We don’t have to stay home and feel sorry for ourselves.”

The book will also include tips for finding good, yet not too expensive places to eat and sleep, as well as the most economical ways to travel. “I think that people my age could travel more,” she said. “Of course, it doesn’t have to be in this grand scale, but it is always possible to take short trips and get reenergized.”

The trip took a lot of preparation, from deciding the itinerary to choosing clothes and other necessities. “But that was fun, getting ready for such a big adventure,” she said. “I packed my car for a whole year with every kind of clothes imaginable, for summer and winter.”

Her kitchen also travels with her. Schell, who is staying at a cozy casita in Taos Lodging, has two shelves full with staples like sugar, coffee, bread and spices. “This way I can fix my breakfast any time,” she said. “And I don’t have to leave my room in the morning if I don’t feel like it.”

Schell plans to be home for Thanksgiving and spend December with her family, busy with Christmas celebrations. In January, she will get together with her sister again, and they will start writing the book.

“I have been writing a blog since January and we both kept individual journals and files about each place,” she said. “The challenge will be putting all this information together.”

Schell is from Chatom, Alabama, where she used to be an elementary school teacher. Now retired, she keeps busy as a pianist at Chatom Baptist Church. “I play for the choir; regular services, weddings, funerals and all sorts of events,” she said. “I have always been really active in the community.”

Her children and grandchildren are supportive of her trip and so are her friends and neighbors in Chatom. “Though I think they will find me somewhat different when I return home,” she said. “Being on the road for a whole year changes a person’s mind and opens it up.”
It has made Schell happier and more grateful about her life.

“Every place I went, people told me they wished they could take a trip like this one,” she said, “That helped me realize how lucky I was.”