Slow life on a bike: From Florida to Taos 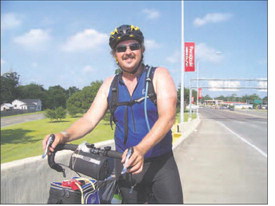 Originally published in The Taos News

Hugh Holborn’s cross­country bike trip was prompt­ed by a death-cheating epi­sode.
His son Alex was driving his Volkswagen Jetta when both he and Holborn dozed off. Holborn was startled to find that the car was going straight toward a tree. He quickly took control of the wheel and avoided an accident.
That was a wake-up call.
“I felt as if I had been given a second chance,” says Holborn. “It had been a tough year. I had had to close my art gallery and had also begun to have health problems. I needed a major change to transform the energetic flow of my life.”
The major change involved riding more than 2,000 miles on a bicycle from St. Augustine, Fla., to Taos. It was a journey that star ted May 21 and ended July 20.
A 54-year-old web design­er and artist, Holborn doesn’t consider himself an athlete. Though he often rode his bike in town, he admittedly “prized comfort over exercise.” And yet, he decided to put every­thing on hold (his business, his life) and cycle to Taos.
Why Taos?
“I lived in this town for eight years and own a house here,” he explained.
He built the house in 1991 and has driven to and from St. Augustine many times. But he wanted to experience more of the country than what can be seen from a car at 70 mph.
“There is so much out there,” he said, “and we always pass by at the speed of light. We need to slow down.”
The need to slow down is the main concept behind his blog www. slowlifeonabike.com, where he documented the trip. Holborn has even coined a term — Time Deficit Syndrome— to describe the constant rush that prevailed in his life.
But it wasn’t just all ride and no work. Holborn traveled with his laptop and completed sev­eral projects on the road while his office manager took care of the business in Florida. He worked in libraries and coffee houses.
“McDonalds is a great resource to find Wi-Fi,” he said.
Holborn stayed in camp­grounds, churches and fire departments. “I would call the battalion chief and ask if I could camp behind the fire station. Usually, they let me use a bed, a shower and even fed me.”
He also found places to sleep through Warm Showers, an organization that suppor ts cyclists on the road.
He wanted to see the ocean all the way to New Orleans but when he began the tr ip, the oil spill had already star ted.
“I didn’t actually see the spill,” he said, “but felt the tenseness, the cloud of con­cern over the people and the entire place.”
What about personal safe­ty?
“My friends asked if I was taking a gun,” Holborn said. “I didn’t, because I did not want to attract that kind of energy. I had some pepper spray in case dogs chased me, but the only one that did was a big Chihuahua in Bayou La Batre.” His best experiences were about the discover y of human kindness to strangers. In Lee, Fla., he met law enforcement officer Dale Kinard, a guardian angel in uniform. His story is told in the blog post “Buddha at the Inspection Station,” where both men reflect about the meaning of life.
Though he traveled between 45 and 60 miles a day, pull­ing a trailer with 40 pounds of gear and carr ying another 40 pounds on his back, Holbor n acknowledges that the hard­est part of the trip wasn’t the physical effor t.
“The most difficult-to-con­trol space was that between my ears,” he said, laughing. “I kept imagining myself at work, taking care of the business, answering e-mail. It wasn’t easy to let go of all that.”
Holborn did accomplish the major change that was the whole idea behind the trip. He now relishes the sense of peace he got out of his journey. It allowed him to start moving at a slower pace.
“When you are pedaling, days are measured in a differ­ent way,” he says. “Your sense of time is altered and you get back to how it must have been when people crossed this country in carts and horses.”
“It was a spiritual journey,” he said, thoughtfully. “Cycling was just a method that taught me to slow down.”
He also lost around 15 pounds and his health has improved. “I retrieved myself,” he says. “I know I’ll be fine now.”
Holborn says that it has been difficult to get off the bike.
“It’s going to take a while to go back to reality.” He paused briefly. “Sometimes I feel I should continue pedaling.”